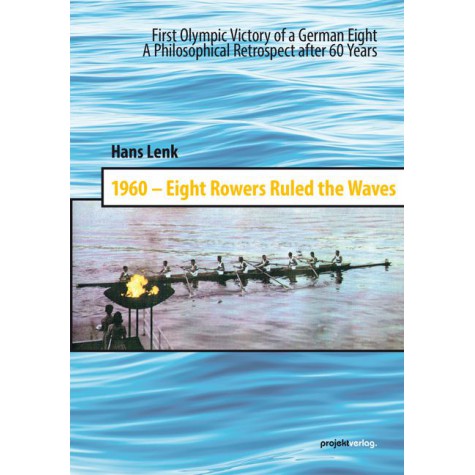 Hans Lenk
1960 - Eight Rowers Ruled the Waves
First Olympic Victory of a German Eight
A Philosophical Retrospect after 60 Years
2020, 101 pages
ISBN 978-3-89733-512-7
The Blue Ribbon Rowing Race of the Rome Olympics 1960 60 years after the first Olympic victory of a German eight, the author – as a member of that crew – looks back.
“For four years we had lived for this goal. There was hardly time for anything except daily workouts, traveling, regattas, races, times, diet, exercise, trimming boats, variations in condition, tactics, strategy. Rowing seemed to be the most important thing in the world. The sporting myth caught imagination and built up motivation.” Being in the team led to top experiences of an active life: here as a cooperative endeavour fulfilling a “mythical dream.” The very last, the greatest race. A dream came true; a ‘myth’ became reality. - “The Eight − it’s the crew per se,” a German poet (Hagelstange) wrote about that “blue ribbon race of Rome” (Noel-Baker). 5:57 minutes for a new record time and Olympic Gold. The highest possible victory in sports changed all rowers’ ensuing lives shaping their mentality, autonomy and self-understanding. The “golden end” was prepared through tough training, active devotion and personal commitment. And after all? What is the meaning of such performance that did - at that time - render neither bread nor pay nor rent nor sustenance, nor even scholarship? Is life but a race? Does an Olympic success make sense in itself, or perhaps by being applauded by many? One does not live on bread alone. Such a partial answer would not suffice. Would a sustaining surplus value result from this climax of overflowing power and the freely spending of energy albeit not really necessary for sustenance? Life seems far from such simple philosophies. But isn’t there a grain of truth involved? Sport is active life at its top. Its highest accomplishments cannot be artificially initiated, motivated, delegated or organized by command. You can order somebody to march or enter a marathon, but you can’t simply compel anyone to establish a world record. In sport, as for any other top-level accomplishment, you have totally to identify with your goals, values, plans, activities, and decisions - or you will fail. Top training and races require total dedication. In this way sport is an exemplary realm for understanding self-achieved authentic personal accomplishments. “The structure of achievement is the same in all areas,” the eight’s coach Karl Adam emphasised. This may sound exaggerated, but the pertinent structures are similar, so that some insights from top-level athletics might be transferred to other realms of authentic and creative achievement. And what about fairness and team cooperation? Rowing the eight is the most egalitarian team sport - democratic in essence: “We were all in the same boat. - The eight crew - it’s the team per se!”
Tags: Philosophy