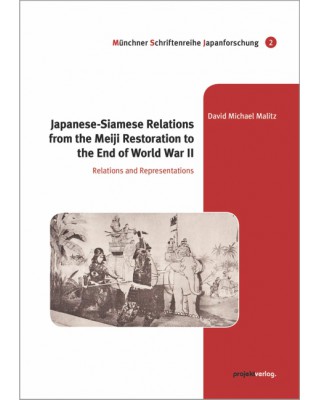 Drawing extensively on sources in both Japanese and Thai, this volume traces the development of diplomatic, economic and cultural exchanges between the Empire of Japan and the Kingdom of Siam, as Thailand was known until 1939, from the mid-nineteenth century to the end of World War II. Furthermore, changes in the perception and representation of the respective other are examined in detail, with a focus on how they were influenced by the introduction of the ideas of race and civilization from Europe and North America. It is demonstrated that from the late nineteenth century onwards, Japan was regarded in Siam as a modern yet Asian power and therefore as an exemplar for Siam to emulate. Among the Siamese media and intellectuals opinions differed, however, on the causes of Japanese progress. In Meiji Japan, orientalist perceptions of Southeast Asia emerged, which persisted until the end of World War II. They included the independent Kingdom of Siam.

David Michael Malitz is a lecturer at the Martin de Tours School of Management and Economics, Assumption University of Thailand