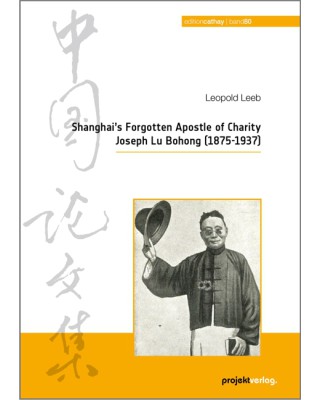 Leopold LeebShanghai’s Forgotten Apostle of Charity Joseph Lu Bohong (1875-1937)edition cathay, vol. 802022; 228 pagesISSN 0946-2325ISBN 978-3-89733-579-0In the 1920s and 1930s Shanghai was not only the largest, richest, and most modern city of China, the site of churches and schools, the residence of politicians and powerful merchants, it was also the home of innumerable beggars and street children. In the heart of this busy metropolis the young and ambitious Catholic Joseph Lu Bohong (also known as Loh Pahong, 1875-1937) had become rich by managing one of the first electric power stations and a tramway line. What made him so special was that he felt compassion with the lot of the poor in Shanghai and actively helped them. He used his organization talents and his financial resources to build a large hospice for homeless people, where, with the help of Catholic nurses, he cared for several thousand orphans, homeless, sick or old people. He founded a hospital to treat infectuous diseases, and later he built China’s first large institute for mental diseases. He made regular visits in hospitals to console the moribund, and he even hurried to prisons to baptize criminals hours before their execution, since he wanted to save their souls. Based on Chinese and western sources and on recent interviews with the grandson of Lu Bohong, this book tells the amazing and inspiring story of the life of Joseph Lu Bohong, a Catholic layman of international reputation who was killed in a mysterious assassination in 1937. Only after eighty years the enigma of “Who killed Lu Bohong” could finally be solved ...

Leopold Leeb, born in Austria in 1967, studied theology in Austria and Chinese philosophy in Beijing. He obtained a PhD from Peking University in 1999 and has been teaching the classical languages (Latin, Greek, Hebrew) at Renmin University of China, Beijing, since 2004. He has published several works in Chinese and western languages. Leeb translated and edited the essays by He Guanghu in the volume Sino-Christian Theology. Born in Sorrow, Grown in Grief (Projektverlag 2020).