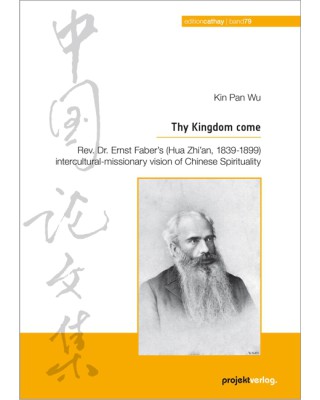 Kin Pan WuThy Kingdom comeRev. Dr. Ernst Faber’s (Hua Zhi’an, 1839-1899) intercultural-missionary vision of Chinese Spirituality
edition cathay, band 79 2022; 349 SeitenISSN 0946-2325ISBN 978-3-89733-567-7“How should it be possible to understand a German missionary like Ernst Faber as a progressive Christian and a viable bridge between ʻEast’ and ʻWest’, as well as a strong bridge between China and Germany? Ernst Faber was able to do so because he was at once a theologian, a translator and a sinologue. Nowadays most of those who are in ʻChinese Studies’ are confined to one profession and by this two languages (English and Chinese) which they of course master. Their third language is that of ideology. They fail to understand Christian dogma as some part of any civilization because their ideology prevents them from seeing it. As far as Ernst Faber was concerned, Chinese culture was not alien to Europe and neither was European civilization alien to China. European and Chinese culture go side by side today just like they did in the past. This is an explanation of how Faber saw the two cultures being interacted. In this prospect, Ernst Faber was progressive; even more so than some scholars today. That Dr. Wu discovered a ʻnew’ missionary in all his aspects (including society and politics) makes his publication invaluable. In this respect, he follows his teacher, Dr. Lauren Pfister, late of Hong Kong Baptist University. Dr. Pfister focused on how to discover religious elements in Chinese culture which can build a common ground with Christianity or Buddhism.“ Wolfgang Kubin

Dr. Kin Pan Wu, received his Dr. phil. in Sinology from the University of Bonn. Being a pastor, he has been serving in the Protestant church since 2003. Nowadays, he is a pastor in the Chinese Rhenish Church, Hong Kong. Being a church historian and theologian, he has been teaching courses relating to Chinese Christianity, mission studies, contextual theology, and church ministry at the Hong Kong Lutheran Theological Seminary and the Hong Kong Alliance Bible Seminary for several years. He published many books, articles and translations in Chinese, English, and German, on various topics like the Taiping Heavenly Kingdom, spirituality, contextual theology, etc.