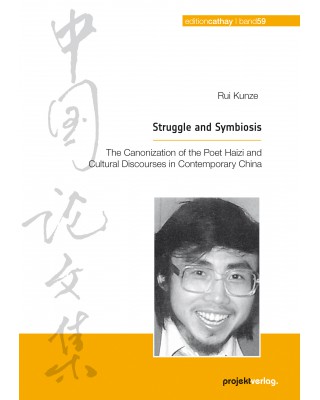 Rui KunzeStruggle and SymbiosisThe Canonization of the Poet Haizi and Cultural Discourses in Contemporary Chinaedition cathay, Vol. 592012; 340 pages (Englisch)ISSN 0946-2325ISBN 978-3-89733-250-8The poet Haizi committed suicide in March of 1989, only months before many others died on June 4th of that same year. A relatively obscure poet at the time of his death, Haizi is now hailed as the epitome of the "hero of poetry" whose writings represent the idealistic 1980s. Does Haiz´s death coincide with the 1989 pro-democratic movement only in time or are there certain connections? Why are Haizi and his poetry interpreted as representative of the "idealism" of the 1980s? What does this interpretation suggest about culture and society in post-1989 China? This study examines the ongoing canonization of Haizi. It first traces the cultural practices involved with the canonization from 1989 to 2010. After contextualizing Haizi and his writings within discussions of "modernism" and "world literature," this study investigates three literary aspects of his texts contributing heavily to his canonization: the literary theme of minjian to contest the offi cial narratives of "history" and "nation"; the writing of epic to create a national canon; and the rhetorization of Christian symbols and motifs which shares ideological grounds with the "Mao style" in their prescription of a "sublime" poet-hero. Theoretically founded on E. Husserl´s phenomenological notion of "sedimentation", this study observes the continuity and changes in Chinese culture from the Maoist era to the 1980s and the post-1989 decades, in particular the increasingly subtle struggle and symbiosis between literature and politics, between the intellectual and the state in China.