Philosophy in the History of China 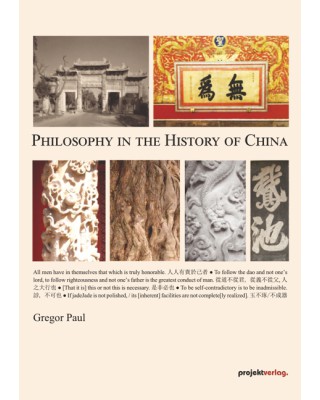 Philosophy in the History of China

Do not develop a passion for mere difference. 不惟好異.
Generalized maxim from the “Classic of Documents” 書經.

The book deals with Chinese philosophies that are of historical and systematic significance, pursuing the question of whether they could contribute to developing a global philosophy. In its descriptions and evaluations of such traditions and orientations as Confucianism, Daoism, Mohism, Legalism, Buddhism, and Maoism, the book investigates the ideas Chinese philosophies provide to solve such basic problems as how to defend one’s personal dignity, how to gain and communicate knowledge, how to argue in a valid and nevertheless becoming way, or how to harmonize moral obligations and aesthetic interests..

Gregor Paul, born 1947, studied at the universities of Tübingen, Heidelberg, Mannheim, and Karlsruhe, graduating in philosophy, mathematics, and German studies. In philosophy, he holds a PhD and habilitation degree. Currently, he is a professor of philosophy at Karlsruhe Institute of Technology and Honorary President of the German China Association, of which he has been president for 20 years. Gregor Paul spent about 10 years in Japan, China, Hong Kong, and Taiwan, teaching as guest professor, docent, or lecturer. For 20 years, he was an academic advisor to a Japanese culture center in Germany. His main interests are in aesthetics, logic, and philosophy of human rights.