The Buddhist Nun´s Ordination in the Tibetan Canon 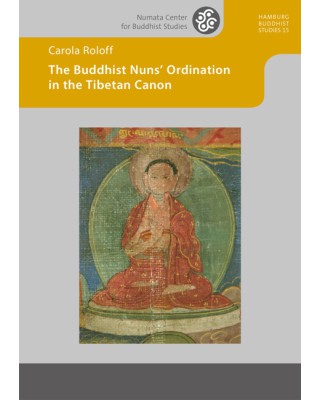 The Buddhist Nun´s Ordination in the Tibetan Canon

Professor Roloff has offered an enormous gift to Vinaya scholars, to scholars of Tibetan Buddhism, to the monastic community, to scholars of women in religion, and most of all to Buddhist women both lay and monastic with the publication of Buddhist Nuns‘ Ordination in the Tibetan Canon. The editions and translations of important texts concerning the ordination of women are erudite, comprehensive and clear. They will be invaluable primary resources for anyone interested in the issue of the restoration of the Tibetan nuns’ full ordination lineage. Prof. Roloff’s analysis of the legal and religious issues, and her argument for the procedure for the restoration of this lineage is meticulous and convincing, setting a new standard for argument in this important debate.Jay L Garfield, Doris Silbert Professor in the Humanities and Professor of Philosophy and Buddhist Studies, Smith College and the Harvard Divinity SchoolAn academic book to be proud of for this century and centuries to come. Bhikkhunīs around the world offer deep gratitude to her work.Venerable Bhikkhuni Dhammanandā (Dr. Chatsumarn Kabilsingh), the first Theravāda bhikkhunī in Thailand and Professor Emeritus, Thammasat UniversityAmidst a wealth of discussions on Buddhist nuns’ ordination, this edition and translation of a fascinating text on rituals and regulations in the Tibetan tradition presents a much-needed exploration of all the salient issues. Leaving no stone unturned, it lays the foundation for future research and is essential reading for anyone with an interest in gender and institutions.Prof. Dr. Ann Heirman, Head of the Department of Languages and Cultures and the Centre for Buddhist Studies, Ghent UniversityThis is an important book. It will provide a solid foundation for any future discussion of what might be an unnecessarily complicated issue. The careful critical editions of the canonical sources involved are especially welcome.Gregory Schopen, Distinguished Professor Emeritus, Department of Asian Languages & Cultures, UCLA